This guy is a bad ass if it's all true.

That is true, he later wrote a book "House to house". alot of that went on during the entire iraq war

anyone got the title of the book ? 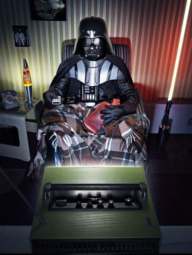 that guys calm cool and collective as he tells the story. ive seen this before. its alwys nice to hear storys like this.

i wouldnt say hes crazy. he had a job to do and he did it to his best ability. hes a survivor.

mrln said:
i wouldnt say hes crazy. he had a job to do and he did it to his best ability. hes a survivor.

The blood of ancient Europe isn't dormant in his veins. He's a warrior. I never agreed with being in Iraq, but to the people who had to go, and especially to people like this man, I agree, hats off.

The actions for which Bellavia earned a Silver Star took place on his 29th birthday. As a member of Company A, Task Force 2-2, 1st Infantry Division, his platoon was assigned during Operation Phantom Fury to clear a block of twelve buildings from which Hezbollah insurgents were firing on U.S. troops. The platoon began searching house-to-house. At the tenth house, Bellavia fatally shot an insurgent preparing to load a rocket-propelled grenade. A second Hezbollah insurgent fired at him, and Bellavia wounded him in the shoulder. When Staff Sergeant Bellavia entered a bedroom, the wounded insurgent followed, forcing Bellavia to kill him. When another insurgent began firing from upstairs, Bellavia returned fire and killed him. A fourth insurgent, then, jumped out of a closet in the bedroom, yelling and firing his weapon as he leaped over a bed trying to reach Bellavia. The insurgent tripped and Bellavia wounded him. Bellavia chased the insurgent when he ran upstairs. He followed the wounded insurgent's bloody footprints to a room on the left and threw in a fragmentation grenade. Upon entering the room, Bellavia discovered it was filled with propane tanks and plastic explosives. He did not fire his weapon for fear of setting off an explosion and instead, then engaged in hand-to-hand combat with the insurgent, which lead to Bellavia killing the Hezbollah insurgent by stabbing him in the collarbone with a Gerber pocketknife.[3]
Click to expand...

aryan,i didnt remember the commentation of them being in an explosive room. i tought it was because of no ammo. either way,smart move on his part. maybe the insurgent had no more ammo. if he had,ya know the scumbag wouldve fired his weapon blowing both of them up. right? and bellavia useing his head, resorting with hand to hand....

using the sappi plate to bash his head in, thats improvisation right there
You must log in or register to reply here.
Share:
Email Link
Top