Dallen Forrest Bounds (August 9, 1971 - December 23, 1999) was an American serial killer. After killing two acquaintances, he barricaded himself with two women and ultimately committed suicide. Law enforcement officers have closed four murders in Greenville and Pickens counties of South Carolina, and officials in the state of Washington suspect he was involved in several other murders.

June 26, 1999 - Radio Shack employee Jonathan Lemuel Lara was restrained with flex ties to a chair in the back room of a Radio Shack in Greenville, South Carolina. Lara was stabbed in the neck with a screwdriver and subsequently died. Casandra Laster, Bounds' accomplice, was found guilty of accessory after the fact to felony murder in 2001. Laster appealed her sentence of 15 years but her appeal was dismissed in 2003 by the South Carolina Court of Appeals. Law enforcement had indicated to the court that she had not notified them of Bounds involvement until after he killed himself in December of 1999.

December 22, 1999 - A florist was killed in the back room of a floral shop in Greenville.

Greenville plagued by serial killer a decade ago

Ten years ago this month, Greenville County had just become the target of a serial killer.

It began inside a Laurens Road Radio Shack on a Saturday afternoon in June 1999 then stretched across town that December to a Rutherford Road florist shop on a Wednesday afternoon just days before Christmas.

The following morning, just hours after the second slaying inside the Greenville-Pelham Florist, the killer – who’d lived the entire time on East Park Avenue in Greenville less than a mile from the Greenville County Law Enforcement Center – would strike one final time after breaking into an Easley home.

Officials in the state of Washington would later name the Ashland, Ore., native as a suspect in at least three unsolved murders there.

Detectives with the Greenville Police Department weren’t sure exactly what they were dealing with when Radio Shack employee Jonathan Lemuel Lara was found dead in a back room of the store on June 26, 1999.

Lara had been restrained with flex ties to a chair, and then stabbed in the neck with a screwdriver. The killer had left through a back door after locking the front door, turning off the lights and hanging a closed sign in the window.

Nearly six months later, the scene was repeated when somebody walked into a tiny flower shop on a busy street in broad daylight and killed the 30-year-old clerk, Karen Moore Hayden, leaving her face-down in a back storage room in a pool of blood.

The young wife and mother’s body was found by a delivery man sent from the main Greenville-Pelham Florist Shop to check on her. He had to unlock the door to get inside after finding all of the store’s lights turned off and the “Sorry, we’re closed” sign hanging in the front window.

Hayden’s throat had been slit.

Ed Blackburn, who has since retired from the Greenville Police Department, was serving at the time as the lieutenant over the Detective Division.

“There are some similarities,” he said at the time. “A lot of similarities. It bothers me.”

Like at the Radio Shack, the interior of the flower shop was undisturbed. The vases and flowers Hayden appeared to have been working with hadn’t been touched.

Early the next morning, Pickens County Sheriff’s deputies responding to a 911 call at Timothy Ott’s residence on Antioch Road had to kick in the door to get inside. They found Ott’s ex-wife, Sandra Ott, on the floor near the kitchen with a gunshot wound to the head.

The Ott’s 5-year-old son was found by authorities asleep in his bed.

The neighbor was later found hiding in a closet.

Nearly 12 hours later, Bounds was located at a nearby home on South Third Street in Easley where he had taken two women hostage. When Easley police entered the home, Bounds put a semi-automatic gun to his head and pulled the trigger.

Investigators later said Bounds was likely stalking Sandra Ott, who they identified as his girlfriend.

Two weeks later, Greenville police announced the arrest of Casandra Cae Laster, 29, on a charge of accessory after the fact of murder in connection with Lara’s murder. Laster lived with Bounds at his East Park Avenue apartment.

Mike Bridges, Greenville’s police chief at the time, confirmed that authorities were investigating whether Bounds was responsible for the unsolved murders at the Radio Shack and the Greenville-Pelham Florist.

The following day Bridges identified Bounds as the killer.

An anonymous phone call from a woman to police after the Easley murders had linked Bounds to the other killings.

Laster was found guilty of accessory after the fact of felony murder in 2001. She appealed her sentence of 15 years, but the case was dismissed in 2003 by the South Carolina Court of Appeals.

She has since been released. 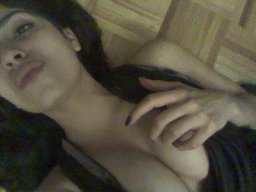 When i saw "revenge" as the motive, i nearly died laughing.
I was browsing through the archives and this guy's picture stood out
You must log in or register to reply here.
Share:
Email Link
Top