Cornelius Gerhardus van Rooyen ('Gert' van Rooyen) was a South African paedophile and serial killer who, together with his partner Joey Haarhof, abducted and murdered at least six young girls between 1988 and 1989.

Their victims were never found as the pair committed suicide when faced with arrest after the escape of their last kidnap victim.

Van Rooyen's first crimes were theft, being sent to a reform school in 1954 for stealing a car and rifle, followed by imprisonment in 1960 for stealing motor spares and clothing.

He married and subsequently fathered six children. He ran a building construction business together with his brothers.

In 1979, Gert van Rooyen abducted two girls aged 10 and 13, taking them to the Hartbeespoort Dam near Pretoria, where he punched them in the face to force them to strip naked and perform sexual acts. Van Rooyen released the girls in Pretoria the following day. He was subsequently arrested and sentenced to four years imprisonment for abduction, sexual assault and common assault of the girls, serving three years before being released.

In September 1983, Van Rooyen and his wife Aletta divorced. In 1988, he started dating the attractive looking divorcee, Francina Johanna Hermina Haarhoff ("Joey" Haarhoff). The couple holidayed together at Warmbaths and Umdloti, on the KwaZulu Natal coast.

On 1 August 1988, 14 year old Tracy-Lee Scott-Crossley of Randburg near Johannesburg disappeared. She was seen by witnesses climbing into a VW Beetle outside the Cresta shopping mall. Her brother, who had declined an offer to go with her, was severely guilt-ridden and traumatized by her disappearance. In later life he was found guilty of murder but the conviction was overturned.

On 22 December 1988, twelve year old Fiona Harvey of Pietermaritzburg disappeared. A white Ford 'Bantam' pickup used in her abduction with an advertisement for Van Rooyen's building-contracting business on it would later link him to this crime.

In July 1989, sixteen year old Janet Delport of Durban disappeared after being abducted in a shopping mall by a blonde woman. She was later found wandering around distressed, but unharmed.

Van Rooyen was thought to use Haarhoff to lure young lure girls for him. Children's homes reported that she telephoned requesting to bring girls home for the holidays and weekends. At the end of 1989, a 14 year old girl from an orphanage in the Orange Free State spent the Christmas holidays with the couple. The couple applied to foster children, but the application was turned down.

On 29 September 1989, Kobie Wapenaar, Anne-Mari's mother, received a letter from her daughter claiming that she and Odette had run away to Durban with some boys. It is suspected the letter was written under duress.

On 11 January 1990, sixteen year old Joan Booysen of Pretoria was abducted by Haarhoff in Church Square, Pretoria. She was taken to Van Rooyen's home in Malherbe Street, Capital Park where she was handcuffed, drugged and sexually assaulted before being locked in a cupboard. It is likely that Van Rooyen thought the small girl was younger than she was, as she managed to escape and alert the police. Police placed the home under surveillance, and four days later, identified Van Rooyen when he drove past his house in a white Ford pickup that matched the description of a vehicle used in one of the abductions. They gave chase, but Van Rooyen shot Haarhoff and himself dead with a high powered revolver when police closed on him.

All the above disappearances, with the exception of Rosa Piel and Tracy-Lee Scott-Crossley, were linked by witness statements or forensic evidence to Van Rooyen and Haarhof following their deaths. For example, Odette's Boucher's home address, phone number and class captain's badge as well as Anne-Mari's address and home keys were found in his home. However none of the Van Rooyen's victims was ever found, despite extensive Police searches of his business premises and house (dubbed the "The House of Horrors" by the press).

In 1996, Absa Bank donated Van Rooyen's former house to the police to allow the girls' disappearance to be investigated further. On 13 May 1996, police systematically demolished the house in a search for new forensic evidence that might provide clues to the girls' fate. The roof was removed and vacuumed for traces of human hair and nails, then the walls demolished and the kitchen and main bedroom scanned with sonar equipment for cavities. The soil in the garden was sifted and some bones found, but forensic pathologists identified these as non-human.

In February 2001, Flippie van Rooyen, Gert van Rooyen's son, was found guilty of perjury in the Pretoria Magistrate's Court. He was charged with three counts of perjury after giving police conflicting statements under oath relating to the six missing schoolgirls.

On 12 March 2007, renewed interest in the case occurred after a set of adolescent bones was found on the beach near Umdloti, Kwazulu-Natal about 500 m away from a holiday resort believed that Van Rooyen and Haarhoff are known to have visited. Subsequent DNA testing did not identify any of the Van Rooyen victims however.

Significant public attention has been brought to bear on the case recently by the investigative television series, Carte Blanche which controversially dedicated a recent episode to the mystery.

In November of 2007, bones were discovered in a property adjacent to Van Rooyen's house in Pretoria whilst ground was being dug up to install a swimming pool. Local authorities were alerted, and investigations are underway to determine if the bones are human, and of the missing girls.

Paedophile Gert van Rooyen killed his mistress, Joey Haarhoff, and then committed suicide in Pretoria while being pursued by the police. Van Rooyen and his accomplice and lover, Joey Haarhoff, were linked to the disappearance of five girls between 1988 and 1990. They allegedly kidnapped Joan Horn (13), Odette Boucher (11), Anne-Marie Wapenaar (12), Yolande Wessels (12) and Fiona Harvey (12). The girls were never found. The couple's last victim escaped from Gert van Rooyen's house at 227 Malherbe Street, Capital Park, Pretoria, and their death occurred less than a week after her escape.

Flippie van Rooyen, the son of Gert van Rooyen, alleged that the girls had been killed as part of satanic rituals and that their bodies had been burnt with acid, or that they had been taken to the Middle East. He also alleged that three former National Party (NP) ministers had been involved in a child smuggling network with his father that involved selling girls for cash. However, no ground was found for this allegation.

In 1996 Absa Bank donated Van Rooyen's former house to the police for the purpose of investigating the girls' disappearance further. It was believed that the victims had all been taken to the house after their disappearance.

On 13 May 1996 the police began demolishing the house in the hope of finding clues as to the girls' fate. First the roof was removed and vacuumed for traces of human hair and nails, after which the walls were demolished and the kitchen and main bedroom scoured with sonar equipment for secret compartments. The soil was sifted and forensic specialists determined that the bones found at the scene were from animals.

Convicted paedophile Cornelius Gerhardus (Gert) van Rooyen was described as "flamboyant and a sexual braggart" by some people and a "God-fearing man", who claimed to be a preacher, by others.

Van Rooyen, 52, often told guests at his Capital Park, Pretoria, home about his sexual exploits with young women and with girls as young as 5.

Before being linked to the six girls' disappearance, Van Rooyen was convicted of several offences, including molestation.

He was sentenced to "corrective training" in 1954 for stealing a car, but was back in reform school a year later for stealing cars and a rifle. In 1960 he was again imprisoned for stealing motor spares and clothing.

His prison record was clean until 1979 when he was jailed for sexually molesting two girls. He served three years of a four-year sentence.

Van Rooyen, a father of six children, operated a construction business with his brothers from his home. Authorities later said the business appeared to be in trouble, but Van Rooyen was always seen with lots of cash.

However, domestic workers and a handyman at the house claimed he often did not pay them for their services. One domestic worker said Van Rooyen threatened to withhold her pay unless she brought him "young girls from the township".

"Nobody could get in there. They unlocked the security gate for visitors and locked it as soon as you were inside," one neighbour said.

Another said: "What I found strange was that he never parked in front of the house. He always drove into the enclosed car park and closed the gates like a prison warder."

Girls in the area said Van Rooyen "leered, whistled at them and told them they were sexy. He was always hanging over the gate to chat."

Van Rooyen began dating Francina Johanna (Joey) Hermina Haarhoff in 1988. Haarhoff was a light-brown-haired and fair-skinned woman whom a friend described as "very attractive and could have had any man she wanted".

Many thought it was odd for her to choose a short, balding and pot-bellied older man.

Friends and family said Haar-hoff was a hard-working woman who raised her three boys alone after her husband's death in the mid-1980s by working as an accounts clerk and later as a debtor's clerk.

"When she met this man she became as meek as a lamb. She was very much in love with him. I think he bewitched her," one son said.

The couple liked to spend weekends away in Warmbaths and at a resort in Umdloti, KwaZulu Natal.

Haarhoff was thought to be the bait to lure girls into the couple's lair. Children's homes in the area said she often phoned requesting to bring girls home for the holidays and weekends.

In 1989, one 14-year-old girl from a Free State orphanage spent the Christmas holidays with the couple, despite Van Rooyen's previous paedophilia conviction. That year they applied to foster children, but the application was denied.

It was later claimed that Haarhoff abducted all the missing girls and wore a blonde wig as a disguise.

The girls all had a number of aspects in common: colouring; normal family backgrounds that did not point to signs of their being runaways; and they disappeared in daylight from busy shopping areas close to their home.

Before Van Rooyen and Haarhoff committed suicide, they spent a night at the Umdloti resort.

The resort owner described Haarhoff the day they checked in: "She said she was on the verge of a nervous breakdown and had been ordered by her doctor to take a break."

They left the resort the Sunday before they committed suicide - without paying their bill. 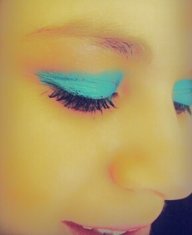 ~save me from my reality~

Thanks for sharing. I totally forgot about this guy!
You must log in or register to reply here.