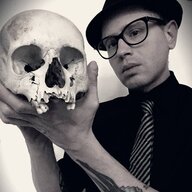 By century's end, in 1897, a tramp named Joseph Vacher, 29, was tried in France for eleven murders. He had been arrested after a seventeen-year-old shepherd was found strangled, stabbed, and with his belly ripped open. Vacher wrote a confession for the judge, claiming that he suffered from an irresistible impulse and had committed murder during frenzies. He thought that, having been bitten by a rabid dog when he was a child, his blood had been poisoned. As his victims died, he said, he drank blood from their necks.
A team of doctors examined the defendant. In the end, because his memory was clear about the crimes and because he had run off, they decided that Vacher had demonstrated sufficient awareness to be judged sane and therefore responsible for what he had done. Yet he had a history of "confused talk," spells of delirium, persecution mania, and extreme irritability. Indeed, three years earlier he had been treated in an asylum when he'd killed a woman and had sex with her corpse. He also had once removed the genitalia from a boy and from a girl. If anyone had a claim to insanity, he did, but in 1898, at the Ain Assizes, he was convicted, and within two months executed.

Varg Vikernes claims self defence, is it true? Lets find out!
2 3