TOKYO – Japan was struck by a magnitude 8.9 earthquake off its northeastern coast Friday, unleashing a 13-foot (4-meter) tsunami that washed away cars and tore away buildings along the coast near the epicenter. There were reports of injuries in Tokyo.
In various locations along Japan's coast, TV footage showed massive damage from the tsunami, with dozens of cars, boats and even buildings being carried along by waters. A large ship swept away by the tsunami rammed directly into a breakwater in Kesennuma city in Miyagi prefecture, according to footage on public broadcaster NHK.
Officials were trying to assess damage, injuries and deaths from the quake but had no immediate details.
The quake that struck at 2:46 p.m. was followed by a series of powerful aftershocks, including a 7.4-magnitude one about 30 minutes later. The U.S. Geological Survey upgraded the strength of the first quake to a magnitude 8.9, while Japan's meteorological agency measured it at 7.9.
The meteorological agency issued a tsunami warning for the entire Pacific coast of Japan. NHK was warning those near the coast to get to safer ground.
The Pacific Tsunami Warning Center in Hawaii said a tsunami warning was in effect for Japan, Russia, Marcus Island and the Northern Marianas. A tsunami watch has been issued for Guam, Taiwan, the Philippines, Indonesia and the U.S. state of Hawaii.
The quake struck at a depth of six miles (10 kilometers), about 80 miles (125 kilometers) off the eastern coast, the agency said. The area is 240 miles (380 kilometers) northeast of Tokyo.
In downtown Tokyo, large buildings shook violently and workers poured into the street for safety. TV footage showed a large building on fire and bellowing smoke in the Odaiba district of Tokyo.
In central Tokyo, trains were stopped and passengers walked along the tracks to platforms.
The ceiling in Kudan Kaikan, a large hall in Tokyo, collapsed, injuring an unknown number of people, NHK said.
Footage on NHK from their Sendai office showed employees stumbling around and books and papers crashing from desks. It also showed a glass shelter at a bus stop in Tokyo completely smashed by the quake and a weeping woman nearby being comforted by another woman.
Several quakes had hit the same region in recent days, including a 7.3 magnitude one on Wednesday.
Thirty minutes after the quake, tall buildings were still swaying in Tokyo and mobile phone networks were not working. Japan's Coast Guard has set up task force and officials are standing by for emergency contingencies, Coast Guard official Yosuke Oi said.
"I'm afraid we'll soon find out about damages, since the quake was so strong," he said

A tsunami watch has been issued for Guam, Taiwan, the Philippines, Indonesia and the U.S. state of Hawaii. "Japan has stood by our side in our time of need in the weeks following our tragedy in Christchurch. Our hearts go out to our friends in Japan."
10.39pm: New Zealand's Ministry of Foreign Affairs and Trade sets up hotline following the Japan quake for people seeking information on family.
Anyone seeking information should call 0800 432 111 or 04 439 8000.
10.23pm: Tsunami warning has been extended to entire US and Canada's west coast.
10.08pm: New Zealand officials say main part of tsunami wave appears to be headed away from South Pacific.
9.58pm: New Zealand Civil Defence spokesman says people should stay away from beaches here from 5am tomorrow morning.
9.57pm: International Red cross says main worry is that tsunami is higher than some Pacific Islands.
9.45pm: New Zealand Civil Defence officials say small tsunami will hit country after 6am tomorrow, and warns boaties to shift vessels.
9.40pm: Nearly 70,000 people were inside Tokyo Disneyland when quake struck.
9.29pm: Warning sirens have been sounded in Hawaii.
9.24pm: Firefighters report more than 44 blazes have broken out across northern Japan.

9.23pm: Japan's prime minister says the 8.9-magnitude quake caused "major damage'' in northeastern Japan.
But Naoto Kan said nuclear power facilities in the area were not damaged and there was no radiation leakage.
9.22pm: 3,500 Kiwis are registered as living in Japan.
9.20pm: At least eight people have been confirmed dead following magnitude 8.8 earthquake and tsunami in Japan this evening.

people were still driving and walking by. un aware..i think they might have ded

Heads said:
Rev has been evacuated due to the Tsunami.
Click to expand...

oh that is very cool. i thought about him after hearing this news. this is bad. really bad. 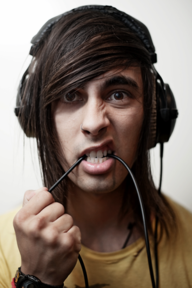 pray for all victim...

That big oil refinery fire is really close to where I live though...I can smell the gasoline and hear Satan laughing in the flames

Actually, that first tsunami to hit was from me pissing my pants in fear (tinged with sexual arousal) as the 8.9er hit

I just wish I was on acid at the time the quake hit! that would have totally been awesome beyond mental recovery....seriously though, I've never felt such violent power before it was fucking indescribable...like nature was screaming "Hey FUUUUUUUUUUU!!!!!!"

revolva said:
I just wish I was on acid at the time the quake hit! that would have totally been awesome beyond mental recovery....seriously though, I've never felt such violent power before it was fucking indescribable...like nature was screaming "Hey FUUUUUUUUUUU!!!!!!"
Click to expand...

im so sorry about everything *sobs* first NZ n now Japan..its trying to destroy you rev

God's really got a hard on for me at the moment....what the fuck did i do to his ass?

revolva said:
God's really got a hard on for me at the moment....what the fuck did i do to his ass?
Click to expand...

dont worry about that, he's pretty fair. hours after that a volcanic erupted in indonesia. you know what..fuck it lol nothing we can do about it i live in bay area and fuck it i say

Incredible. I was up all last night, writing, listening to Coast 2 Coast AM, and around 2:00 AM George interrupted the show with a sketchy report of an earthquake in Japan. I thought, Ring of Fire, those Nips are the most earthquake-savvy civilization on the planet, they eat 6.5's and shit 4.2's, they can handle it.

Then I heard the actual magnitude was 8.9 and I went HOLY GOLDEN SHIT! So I switched everything to World Radio Japan and started streaming the fucking tsunami in REAL TIME and, baby, I gotta hand it to those Japs, they got a set of NUTS on them! Fuckers dying on the ground and they've got a million fucking helicopters in the air shooting the action LIVE, from the CREST of the baddest-ass tsunami I've ever seen...Motherfucking vehicles and houses and bodies and shit driven before the elements, like the fucking wrath of GOD, a big hand wiping the planet's surface clean..... Un-Fucking-Believable. And Beautiful.

I was so amazed, I kept forgetting to screen capture, so I just set it to capture every 5 seconds. I know the resolution sucks but fuckit man.... Go with what you got.

I was puzzled by those fucking swirling, sucking vortexes that you see in three or four different pictures, like the earth was opening up and sucking in the debris. Too fucking COOL.