ORMOND BEACH, Fla. - An Ormond Beach woman was arrested on Monday after deputies say she drove around a Walmart parking lot throwing out poop-filled paper towels, the second time in a week she's been arrested on charges of fleeing deputies.

Deborah Brinkman, 59, has also been charged with driving under the influence, aggravated battery on an officer, leaving the scene of a crash and felony criminal mischief, according to deputies.

Deputies said Brinkman was driving around the Walmart parking lot just before 3:30 a.m. and throwing out paper towels she had defecated on. When deputies approached Brinkman, she began driving away and attempted to run over a deputy before driving away and into the Golden Corral parking lot. Brinkman damaged three patrol cars and a semi-tractor trailer truck at the Golden Corral, according to the report.

According to the report, Brinkman had slurred speech, was unable to stand on her own and had several cans of alcoholic beverages inside her vehicle when deputies arrested her... 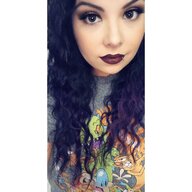 Something tells me she wasn't just under the influence of alcohol, people are crazy nowadays! lol

sew up her asscrack !