Jeffrey Stanton Santa Monica Pier A History from 1875 to 1990, Donahue Publishing: Los Angeles, CA, 1990, 1956
Chapter 5: Santa Monica Pier on the Skids (1941-1974)
"Santa Monica's beach front, like many beach fronts elsewhere, attracted numerous drifers, hustlers and petty criminals. But it was the runaways and perverts that were attracted to its famed Muscle Beach that worried city officials and the police department the most. Their worst nightmare occurred on November 21, 1956 when ten year old Larry George Rice's body was found lying in a pool of blood beneath the Santa Monica Pier. He died three hours later from thirty stab wounds." p. 121
"Two teenagers identified a tall, bushy haired, toothless man with arms of a blacksmith as the man seen with the local lad shortly before the murder. When police found Stephen Nash, a thirty-three year old drifter and pervert, shortly afterwards, they discoverd the blood soaked hunting knife on the man. He confessed to the sadistic knife slaying. and ten other murders in Long Beach and Sacramento.
"When he was taken back to the scene of the crime the next day, nearly one hundred menacing people gathered and would have lynched him on the spot. Nash said that he talked to the boy for five minutes, then pulled a knife. When the boy screamed he stabbed him in the stomach, then again and again. Nash was convicted and was executed in the gas chamber in 1959. The city, in an effort to prevent similar incidents, fenced off the area under the pier."

Monsters do live among us 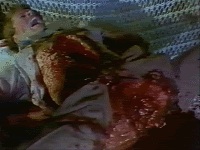 Wow a bum serial killer, who would've thunk it?
You must log in or register to reply here.