The Beast Behind the Priest - Author: Pavel Sachkovsky 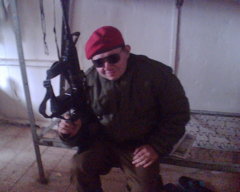 THE BEAST BEHIND THE PRIEST

They locked the doors of the toilet, after they stole the keys from the teachers' room. They pushed the girl to one of the stalls, and just laughed at her. One of the boys picked up her dress and pulled down her panties. She started crying, because she knew what is about to happen. She tried to escape, but they pushed her back to the stall. One of the boys punched her in the face, and she sat on the toilet feeling dizzy from the punch. One of the boys started to unzip his jeans, as she was looking at him with a dizzy look. He slapped her in the face, and pushed her to his crouch. The other boys were laughing. Suddenly one of the stalls opened, and a little boy with black hair and brown eyes looked at them. They quickly attacked him, and pushed him to the same stall. "That's what you get for being a dork, Tim!" One of the boys shouted. Tim tried to fight back, but he got hit in the stomach. He tried to fight the pain, but more and more punches were hitting his stomach. They than continued taking off his pants, and pushed the unconscious girl on top of him. From far it looked as if they were having sex. The boys opened the doors, and ran in the hallways to the principle office. They told him that Tim was having sex with one of the pupils in the toilet. The principle ran to the toilet, and thanked the boys. He entered the toilet, to find Amy Watkins laying on top of Tim Leonard. He pulled Amy off of Tim. "How dare you?!" - the principle got mad at Tim. - "You are going to deal with me, boy. I am calling your parents." Tim looked confused and had a hard time remembering what has happened. The police arrived to investigate the girl, while Tim was in the principle office. "So tell me, Tim, what in the hell were you doing in there?" Tim couldn't remember, he was unconscious for a while. "You don't remember..." - said the principle. - "Well, let me remind you what the punishment for such animal behavior is. You are going to be expelled from here. And your parents will think long and hard about what they are going to do with there bastard son." Tim looked down. He couldn't remember a damn thing from what happened. His parents appeared in the hallway. Lawrence Leonard and Mariana Leonard. They looked at their child with an angry look. "I already gave you the options of what to do, miss Leonard. I hope you consider that option useful." - said the principle. "Mom, I don't remember what happened, but I can be sure I didn't do anything." - said Tim with tears streaming down his face. Mom wasn't looking at him, and just turned her back and said: "Let's go..."

Tim woke up from the nightmare. The memories of his past has been torturing his sleep ever since he got to this school. Two years have passed, and yet he still sees the same dream over and over. He got up from the bed, and looked outside the window. The kids were already outside playing soccer. The door opened and the principle entered the room. He was an old man, who was approximately 70-75 years old. He looked at Tim. "Don't be late to class, my son." He said with a smile. Tim looked at him and just nodded silently. The principle got out of the room, and Tim put on his school uniform. He noticed the picture on the desk. A picture of his entire family. Mom, dad, and his older brother Jason. He last learned that Jason was in a police academy. His goal was to become a policeman. Tim took some time to look at the photo, and walked out of the room, grabbing his backpack. He walked outside and the sun was hurting his vision. He looked around and noticed a girl sitting on a bench. He couldn't talk to her, since the school doesn't allow any contact between the boys and the girls. He silently looked at her, and he noticed she was crying. He wanted to go cheer her up, but he didn't want to get into trouble. He entered the classroom, and waited for the teacher to come in. He was still looking outside the window, at that girl. She was crying. One of the nuns came to her, and told her to go to the classroom. She silently did what the nun told her to do. The nun than looked around and her eyes met with Tim's eyes. Tim quickly turn to his teacher.

That's all for chapter one... Feel free to leave feedback... Chapter Two will be posted later on....

What's the story going to be about and what genre?
You must log in or register to reply here.