The most kissed face of all time (1 Viewer) 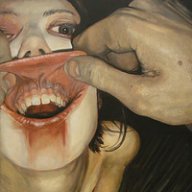 In the late 1880s, the body of a 16-year-old girl was pulled from the Seine. She was apparently a suicide, as her body showed no marks of violence, but her beauty and her enigmatic smile led a Paris pathologist to order a plaster death mask of her face.

In the romantic atmosphere of fin de siècle Europe the girl’s face became an ideal of feminine beauty. The protagonist of Rainer Maria Rilke’s 1910 novel The Notebooks of Malte Laurids Brigge writes, “The mouleur, whose shop I pass every day, has hung two plaster masks beside his door. [One is] the face of the young drowned woman, which they took a cast of in the morgue, because it was beautiful, because it smiled, because it smiled so deceptively, as if it knew.”

Ironically, in 1958 the anonymous girl’s features were used to model the first-aid mannequin Rescue Annie, on which thousands of students have practiced CPR. Though the girl’s identity remains a mystery, her face, it’s said, has become “the most kissed face of all time.”
Click to expand...

pretty coo'
You must log in or register to reply here.

The Inimitable Jeff Lynne...Live...Turn To Stone
2