All 54 people on board a Trigana Air aircraft were killed in a crash two days ago in Indonesia's Papua province, the latest in a string of aviation disasters in the Southeast Asian archipelago, officials said on Tuesday.

Major-General Heronimus Guru, operations director at Indonesia's National Search and Rescue Agency, told a news conference in the capital the passengers' remains were being put into body bags but poor weather had hampered efforts to recover them by air.

Officials have declined to comment on the cause of Sunday's crash until the results of an investigation by the national transport safety committee are known, but Guru said the terrain in Indonesia's easternmost province may have been a factor.

"There's a possibility the aircraft hit a peak and then fell into a ravine because the place that it was found in is steep," he said.

The treacherous terrain of forest-covered ridges hampered rescuers' efforts to reach the site where the Trigana Air Service ATR 42-300 plane came down.

The aircraft's black box flight recorder, which should provide investigators with some answers, was found in the early afternoon. The device will be taken to Oksibil town tomorrow, depending on the weather, Guru said.

Television broadcast footage of rescuers in camouflage fatigues and surgical masks hacking through foliage and sifting through debris at the crash site as a helicopter hovered overhead.

There were 44 adult passengers, five children and infants and five crew on the short-haul flight from provincial capital Jayapura south to Oksibil.

The twin turboprop aircraft was also carrying about $470,000 as part of a village assistance program. 2. The same, or similar, plane that crashed 3. Aerial view of the crash site 4. Rescuer carries one of the flight's black boxes Wouldn't be much left of the bodies.

Tooly said:
Wouldn't be much left of the bodies.
Click to expand... 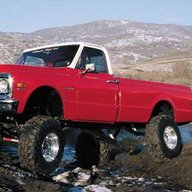 Its weird what humans consider to be tragic. Yes, 54 people died in a plane crash, but im sure 54 people have died from something in the time it took me to type this, but as ive seen people on this site say, zero fucks given. lol
You must log in or register to reply here.

Ratchet Gets Kicked Off Plane & Chaos Ensues At Airport