Link to another video (sorry, im not sure if im allowed to post this, if its too offensive just remove it but it goes with the above story)
VIDEO: http://www.trinkerheim.com/?p=3196 (warning graphic)


The latest video — uncovered by The Sun — shows the terrified pet taped to a broom handle being slowly lowered into the water by a woman.​
Bubbles can be seen rising as it struggles frantically before losing its fight for life.​
The footage, called "Bathtime lol" was posted on YouTube at the weekend by a user called jasminethecat666.​
The same sicko posted a video exposed by The Sun last week, which showed a tiny kitten being fed to a Burmese python — as the Christmas song Little Drummer Boy played in the background.​
The oddball is linked to a film posted last Christmas in which a man kills two kittens by putting them in a bag and sucking the air out with a vacuum cleaner.
Disgusted readers contacted The Sun about the python video. Anna King said: "This scumbag needs to be caught."
Welfare group PETA offered a reward of £2,000 last night for information leading to the arrest and conviction of those responsible. Call the newsdesk on 0207 782 4104or email [email protected]

A hunt has been launched for a sadistic pet owner who filmed himself feeding a kitten to a python.​
The vile video, entitled Python Christmas, shows a man in his 20s carrying the kitten called Jasmine into a bedroom in a Santa hat and then placed on a bed.​
Lurking half-hidden under a pillow lay a yellow Burmese python, which can grow up to 19ft long and is one of the largest snakes in the world.​
​
Jasmine is seen slowly walking across the bed until the thug distracts her and she fatally turns her back on the danger.​
The snake pounces, wrapping the kitten in its coils as it squeezes the life out of the playful animal.​
Once the kitten's tail stops moving the snake swallows her whole — head first. Its cries of agony are drowned out by the Christmas song Little Drummer Boy playing in the background of the video.​
At the end of the seven-minute footage there is a chillingly threat of more 'feeding videos'. It was posted on a site called Flix from an account registered in Islington, north London.​

​
If caught, the sicko faces six months' jail and a £20,000 fine for causing unnecessary suffering under the Animal Welfare Act 2006.​
Among the few clues to his identity are that he is a fan of the Disney film Aladdin. Images and songs from the movie have been posted on his YouTube site.​
An RSPCA spokeswoman said: 'There is no excuse for feeding a live cat to a python.'​
Vet Pete Wedderburn told the Sun: 'The kitten is probably no older than four months. It has no hiding place and can't get away. These are the actions of a sadistic human being.'​
​
http://www.dailymail.co.uk/news/art...twisted-sadisctic-thug-fed-kitten-python.html​
Video:​
http://www.youtube.com/verify_age?next_url=/watch?v=ow5halNLRoc&feature=related

Ya but this is just really really weird... and the Karla Homolka connection ... I have never heard a more twisted story then these two individuals.

This response is priceless.

I posted the vid here and the was not much problem with it until it was removed.

Or was it the shitty xmas song in the back ground ?

Sadistic faggot. Hope he gets HIV with the next load up his ass. 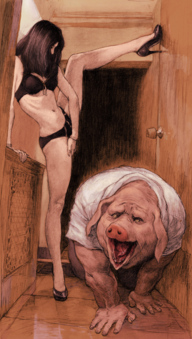 does anyone know where i can see cat kill video No2? this guy is the devil its so sad

dogish said:
does anyone know where i can see cat kill video No2? this guy is the devil its so sad
Click to expand...

If you go into the True Gore section they are all linked in the 1 boy 2 kittens thread.

douggle said:
If you go into the True Gore section they are all linked in the 1 boy 2 kittens thread.
Click to expand...

ive seen that one, i want to see the one where he taped that cat to the broomstick and put it in the bathtub

dogish said:
ive seen that one, i want to see the one where he taped that cat to the broomstick and put it in the bathtub
Click to expand...

the links are in that thread

it doesnt take you to the video in the thread just a picture. thank you Heads, that was pretty sad but the kittens in the bag was harder for me to watch
J

Does anyone have the footage of the kitten drowning? I'm doing some research on Luka Magnotta and this is the only video I have yet to see. I've searched everywhere. If you have it, could you please upload it to a file hosting site like Mediafire.com or any other one? I'm not a sick person who want's to just see this. I've seen much gore and I'm sure this one pales in comparison to what I've seen already. I'm pretty desensitized to at this point to just about anything that's out there. I would much appreciate it if someone could PM me with a link to it as I cannot find it anywhere. Thanks.

i think the user Heads just posted it, do you mean the one where its taped to the broomstick? because thats the one he just posted
J

OK.. I found that link. Thanks dogish..

Besides, it was Christmas, he deserved a gift too.

cant watch the animal shit! too fucked up for me, id really like to kill this guy myself!
You must log in or register to reply here.

Mexico is looking for 43 missing students...

Snuff: Murder and torture on the internet, and the people who watch it
2